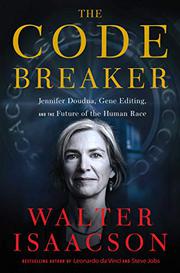 Jennifer Doudna, Gene Editing, and the Future of the Human Race

A magisterial biography of the co-discoverer of what has been called the greatest advance in biology since the discovery of DNA.

For the first third of Isaacson’s latest winner, the author focuses on the life and career of Jennifer Doudna (b. 1964). Raised by academic parents who encouraged her fascination with science, she flourished in college and went on to earn a doctorate in biological chemistry and molecular pharmacology from Harvard. After fellowships and postdoc programs at the University of Colorado and Yale, she joined the faculty at the University of California in 2002. In 2006, she learned about CRISPR, a system of identical repeated DNA sequences in bacteria copied from certain viruses. Others had discovered that this was a defense mechanism—CRISPR DNA generates enzymes that chop up the DNA of the infecting virus. With collaborators, she discovered how CRISPR operates and invented a much simpler technique for cutting DNA and editing genes. Although known since the 1970s, “genetic engineering” was a complex, tedious process. CRISPR made it much simpler. Formally accepted by the editors of Science in 2012, the co-authored paper galvanized the scientific establishment and led to a torrent of awards, culminating in the 2020 Nobel Prize in chemistry. At this point, Isaacson steps back, keeping Doudna as the central character but describing the rush to apply gene editing to altering life and curing diseases, the intense debate over its morality, and the often shameful quarrels over credit and patents. A diligent historian and researcher, Isaacson lucidly explains CRISPR and refuses to pass it off as a far-fetched magic show. Some scientific concepts (nuclear fission, evolution) are easy to grasp but not CRISPR. Using charts, analogies, and repeated warnings for readers to pay attention, the author describes a massively complicated operation in which humans can program heredity. Those familiar with college-level biology will have a better time, but nobody will regret the reading experience.

A vital book about the next big thing in science—and yet another top-notch biography from Isaacson.