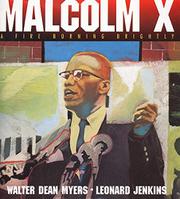 With but a light sprinkling of names and dates, Myers condenses his Malcolm X: By Any Means Necessary (1993) to picture- book length. Myers takes readers through his subject’s childhood and turbulent career, pausing for significant episodes (such as a white teacher’s suggestion that he’d be better off studying carpentry than law), supplying samples of his vivid rhetoric, and tracing his movement toward visions of a more inclusive, less violent revolution. Placing realistic portraits of X and other icons of the civil rights movement against swirling backdrops of faces and street scenes, Jenkins captures a sense of tumultuous times. What emerges most clearly is a portrait of a complex, compelling spokesman who was growing and changing up to the moment he was cut down. (Picture book/biography. 6-8)