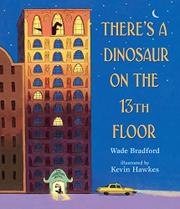 THERE'S A DINOSAUR ON THE 13TH FLOOR

This hotel is for the birds! (And spiders, mice, pigs….)

Mr. Snore, a very tired musician whose face looks like one colossal nose, checks into the Sharemore Hotel one evening. Sadly, the rooming accommodations on the first floor are not up to Mr. Snore’s standards, as the bed is already occupied by a small mouse sleeping on the pillow. The bellhop, who bears a passing resemblance to Tintin, relocates Mr. Snore to the second floor, where he finds a covers-hogging hog. This pattern repeats with each floor until Mr. Snore reaches the 13th and the titular dinosaur. At this point, the joke turns, and it is the annoyed dino who requests a new room when it finds Mr. Snore snoozing on its pillow. The book ends with the exhausted dinosaur sleeping in the lobby with the bellhop. Overall, the execution is fair, if a tad bland. While the page turns reveal each new animal, the preceding images don’t give much in the way of hints as to what they will be, denying young readers a chance to develop their predictive skills. Some of the rooms’ doors are fancifully styled to match their inhabitants, but most are plain—a missed opportunity. The acrylic-and-ink illustrations are amusing enough, but the caricature of Mr. Snore and his schnoz is an odd choice. Both Mr. Snore and the bellhop are white.