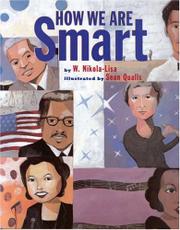 HOW WE ARE SMART

Anchored by massive resource lists for adults in tiny type at the back, these 12 thumbnails attempt, not very successfully, to introduce to young or inexpert readers the idea of “multiple intelligences.” After suggesting that “smart” can mean more than scholastic excellence, the author proceeds to prove the opposite with a cast of professionals that mixes such non-household names as physicist/geologist Luis Alvarez, astronomer Annie Jump Cannon and botanist Ynés Mexía with the more familiar likes of Thurgood Marshall, Georgia O’Keeffe and I.M. Pei. Opposite stylized, expressionistic but still recognizable portraits from Qualls, he introduces each with roughly hewn, rap-style verses, followed by a single-paragraph career sketch. Though at the beginning he lists eight intelligences, such as “Body Smart,” “Logic Smart” and even “Nature Smart,” Nikola-Lisa never directly links any of them to his subjects; instead, he instructs readers to figure it out for themselves—without providing more than scattered, vague clues. It’s a worthy concept for creative types and other misfits to absorb, but the author doesn’t seem to understand it very well himself. (Collective biography. 9-12)