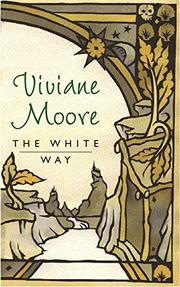 Easter 1146: After thousands of pilgrims gather for the Paschal Mass in Le Puy, France, many of them will walk, some barefoot, in deadly winter weather over the Pyrenees to the Saint Jacques de Compostela in the northwest corner of Spain. This year, however, something more daunting than penitential guilt and freezing temperatures stalks the pilgrims. A group led by Humbert, a grizzled veteran of the “white way” who by making the journey three times already has earned the right to wear three scallop shells, leaves in its wake the mutilated bodies of young men. Chevalier Galeran de Lesnevan, an investigator dispatched by a concerned baron, joins the band to find a young woman known as Bruna the Untamed escorting her strangely silent mistress. The two women are an unusual addition to a mostly male group comprising a poor mason, his ailing wife and 17-year-old son, a handsome shepherd, a cleric, two wealthy townspeople, and a talented, handsome troubadour, Ronan, who is in fact Galeran’s older brother. Ronan, who left their native Brittany ten years ago for the Orient, carries the scars of adventures he is not eager to share with his younger brother. One of these pilgrims is a murderer, and Galeran will unravel the mystery before Compostela, but not before several more depart the white way prematurely.

Moore’s descriptions of the pilgrimage’s hardships are gripping, but the prose in her English-language debut is turgid Ivanhoe with a Gallic accent.