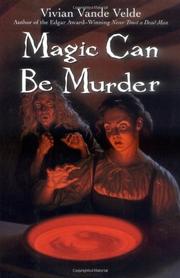 MAGIC CAN BE MURDER

Nola and her mother are witches, which makes life difficult for them in the vaguely medieval times in which this story is set. Ever since she was little and realized that not every child could cast spells as she could, Nola and her mother have had to move often to avoid suspicion. Nola most often uses a water spell; by throwing a hair into a container of water, Nola can watch what its owner is doing. One day Nola and her mother find work in the house of a silversmith in the village of Haymarket. Before too long, though, Nola’s careless use of witchcraft, specifically the water spell, gets them both in trouble and both, ultimately, implicated in a murder mystery involving the death of the silversmith. It becomes Nola’s job to unravel the mystery and find the true culprit, thus absolving her mother and herself of the blame. Unfortunately, the story is not as exciting as it needs to be, has a plot and exposition that is convoluted and belabored, and an ending that is contrived and unsatisfying. For a more successful melding of the medieval, of murder, and of magic, try Midnight Magic by Avi, and for a much better offering by Vande Velde, stick with last year’s There’s a Dead Person Following My Sister Around, a much more successful and enjoyable book. (Fiction. 10-14)