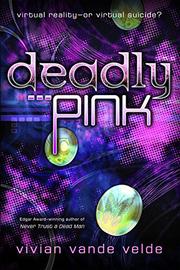 Vande Velde again traps teenagers inside an authentically depicted arcade game—but here she works twists into the premise that are both amusing and crank up the danger.

As in User Unfriendly (1991) and Heir Apparent (2002), the game, called “The Land of Golden Butterflies,” is manufactured by the shadowy Rasmussem Corp. and is fully immersive, fed directly into the brain through electrodes. Into this game 14-year-old Grace Pizzelli’s big sister Emily has gone; moreover, she has refused to come out and altered the code so she can’t be forcibly ejected. As sessions that run longer than a few hours cause brain damage and death, the corporation desperately turns to Grace to follow Emily in and persuade her to leave. Reluctantly agreeing, Grace discovers to her disgust that, rather than offering the usual heroic-fantasy or science-fiction setting, this digital world has been colored in pinks and lavenders. It is stocked with (supposedly) benign magical creatures and hunky male servitors—in general, it seems designed to cater to 10-year-old would-be princesses. The idyll has gone sour, though, because thanks to Emily’s fiddling, not only have the wish-granting sprites turned nasty, but the game’s governing Artificial Intelligence has changed the Rules—disabling the “Quit” function and forcing both Grace and her already-failing sister to embark on a seemingly hopeless quest with their real lives at stake.

Emily’s motives turn out to be little more than a pretext, but the author delivers another clever, suspenseful drama in the digital domain.