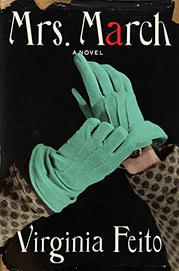 In a horror-laced psychological drama, the wife of a bestselling New York novelist learns his latest protagonist is modeled on her.

“But…isn't she...a whore?” whispers Mrs. March to the woman behind the counter at the patisserie she visits daily, who, like every other person in Manhattan, is reading, and loving, her husband's new book. Abandoning her purchases, she bolts from the store, never to return, and immediately confronts an advertisement featuring a woman smiling knowingly under the words "SHE HAD NO IDEA." Even the billboards know! This is just one of innumerable creepy details that speed Mrs. March's descent into a spiraling vortex of psychosis. Not that it's all in her head—copies of the book are everywhere, even in someone's cart at the grocery store. Debut novelist Feito sets her story in a hazy period in the pre-technology past and confines much of the action to her protagonist's claustrophobic Upper East Side apartment, where terrifying literati regularly convene for unbearable parties. Mrs. March's painfully low self-esteem drives the self-consciousness, paranoia, and jealousy that control her relationships with everyone from her housekeeper to her son to a family she runs into at the skating rink. The husband is there on a weekday? She thrills to speculate this means he's been laid off and concocts an elaborate lie to cover the real reason her own son is not in school. Mrs. March is the only character in the book who doesn't get a first name, even in a flashback to her childhood: "On tiptoes, Mrs. March cupped her hand and whispered into her mother's ear...'I have to go to the bathroom.' " While the poor woman never gets a break from the misery, Feito does offer the reader a few homeopathic drops of humor, such as when her protagonist learns that people will do just about anything you ask if you tell them you work for the New York Times. Feito is Spanish and lives in Madrid, but somehow she is the love child of Patricia Highsmith and Shirley Jackson.

On her way to the screen played by Elisabeth Moss, Mrs. March is absolutely right—everyone is talking about her.