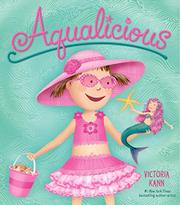 Pinkalicious goes to the beach.

All decked out in her signature color, Pinkalicious is happily beachcombing when she picks up a large shell, and out tumbles a pink-haired, aqua-finned (and bra’ed) miniature mermaid. The creature introduces herself as Aqua and explains that she is a merminnie, “a smaller, rarer species of mermaids.” Pinkalicious’ response is predictable: “WOWEEE!” Toting her new find in her beach bucket, the little girl carries her to her family’s (pink) umbrella and dumps her out to show her off. Aqua’s reaction is also predictable: she wants to go back home. Disregarding her captive’s desires, Pinkalicious and her little brother, Peter, build a big sandcastle for Aqua; the ungrateful thing still wants to go home, but the children distract her with a snack and a game of minigolf. After more mild adventures, the children finally put her in the ocean—but it turns out that Aqua is the star merminnie of the aquarium nearby. The children’s cruelty is never interrogated, beyond Aqua’s carping at being carried in the beach bucket. Kann’s digital collages feature stiff characters with often unnaturally long arms and disproportionately tiny feet; when they are not smiling vapidly, their mouths form little O’s of consternation. The text is riddled with exclamation points, as if hoping to make up in enthusiasm what it lacks in craft.

For fans of the series, more of the same.