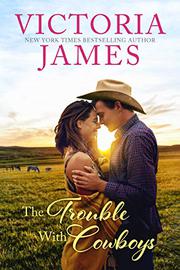 THE TROUBLE WITH COWBOYS

New York Times–bestselling author James’ (A Christmas Miracle for the Doctor, 2018, etc.) latest is a second-chance romance between a rogue cowboy with an ailing parent and a hardworking small-town girl with artistic dreams.

Ty Donnelly has reluctantly returned to his hometown of Wishing River, Montana, after eight years of competing in rodeos and working as a ranch foreman. His father, Martin, is recovering from a stroke and unable to run the Donnelly ranch on his own—but neither father nor son has forgotten the conflict between them that drove Ty away. Meanwhile, Lainey toils away in the town diner, fulfilling a promise that she made to her late grandmother Tilly to keep the restaurant going. She also brings Martin dinner every night, and she finds her former crush on Ty rekindling. As Ty navigates his fraught relationships with his father and his former friends Dean and Cade, Lainey harbors a secret about a hefty loan that Martin granted her just before his stroke. She and Ty begin a tentative courtship built on attraction and respect, bonding over new ideas to put the ranch in the black once again. Eventually, Lainey confesses her dream to study art in Florence, Italy, which she’s deferred twice. But when she and Ty learn that their priorities may be very different, each must decide whether love really can conquer all. James builds a vibrant world in the fictional Montana town, featuring believable supporting characters, such as Lainey’s naturopath best friend, Hope Martin, and physician Dean, who naturally hate each other—sowing the seeds for a future book, no doubt. There are no wacky misunderstandings here, though; instead, Ty and Lainey must learn to be honest with each other—about everything from premarital sex to family relationships—before the predictable ending. Sick parent Martin seems to appear and disappear at the convenience of the plot, and the secondary conflicts seem overly numerous. That said, the dialogue is sharp, the setting is clear, and the protagonists are compelling throughout.