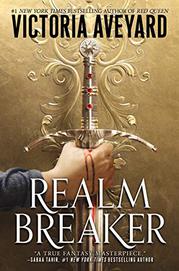 When the realm is in danger, only a small band of misfits can save Allward.

An in medias res prologue, told from the point of view of the lone squire accompanying the 12 Companions of the Realm, tosses readers into the thick of a quest. Half the Companions are human heroes and half are immortal Elders; they seek to stop a rogue thief and his wizard accomplice from using a magical Spindle to tear a passage between worlds for nefarious ends. A disastrous battle sends squire Andry fleeing with Cortael’s sword so villain Taristan can’t get his hands on it. Grieving Elder Dom requires both a person of Corblood (a descendant of human travelers from another realm) and the Spindleblade Andry protects to stop Taristan from bringing ruin to the realm. Dom seeks Cortael’s secret daughter, Corayne, a bright but sheltered teenager with a pirate mother. At times the narrative tension is undermined by flashbacks that readers already know the conclusions to and by occasional repetition caused by the multiple point-of-view jumps, but there’s a wide variety of action scenes, daring escapes, and betrayals. Many tropes and character types are familiar, but exquisite descriptions and clashing motivations result in a nuanced, sprawling realm with a sense of complicated history. This world is highly diverse in terms of both skin tone and in the refreshing range of roles female characters inhabit.