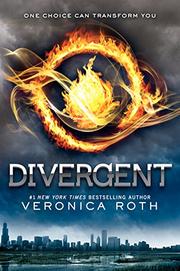 From the Divergent series, volume 1

Cliques writ large take over in the first of a projected dystopian trilogy.

The remnant population of post-apocalyptic Chicago intended to cure civilization’s failures by structuring society into five “factions,” each dedicated to inculcating a specific virtue. When Tris, secretly a forbidden “Divergent,” has to choose her official faction in her 16th year, she rejects her selfless Abnegation upbringing for the Dauntless, admiring their reckless bravery. But the vicious initiation process reveals that her new tribe has fallen from its original ideals, and that same rot seems to be spreading… Aside from the preposterous premise, this gritty, paranoid world is built with careful details and intriguing scope. The plot clips along at an addictive pace, with steady jolts of brutal violence and swoony romance. Despite the constant assurance that Tris is courageous, clever and kind, her own first-person narration displays a blank personality. No matter; all the “good” characters adore her and the “bad” are spiteful and jealous. Fans snared by the ratcheting suspense will be unable to resist speculating on their own factional allegiance; a few may go on to ponder the questions of loyalty and identity beneath the façade of thrilling adventure.

Guaranteed to fly off the shelves.