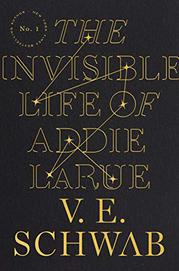 THE INVISIBLE LIFE OF ADDIE LARUE

When you deal with the darkness, everything has a price.

“Never pray to the gods that answer after dark.” Adeline tried to heed this warning, but she was desperate to escape a wedding she didn’t want and a life spent trapped in a small town. So desperate that she didn’t notice the sun going down. And so she made a deal: For freedom, and time, she will surrender her soul when she no longer wants to live. But freedom came at a cost. Adeline didn’t want to belong to anyone; now she is forgotten every time she slips out of sight. She has spent 300 years living like a ghost, unable even to speak her own name. She has affairs with both men and women, but she can never have a comfortable intimacy built over time—only the giddy rush of a first meeting, over and over again. So when she meets a boy who, impossibly, remembers her, she can’t walk away. What Addie doesn’t know is why Henry is the first person in 300 years who can remember her. Or why Henry finds her as compelling as she finds him. And, of course, she doesn’t know how the devil she made a deal with will react if he learns that the rules of their 300-year-long game have changed. This spellbinding story unspools in multiple timelines as Addie moves through history, learning the rules of her curse and the whims of her captor. Meanwhile, both Addie and the reader get to know Henry and understand what sets him apart. This is the kind of book you stay up all night reading—rich and satisfying and strange and impeccably crafted.

Spanning centuries and continents, this is a darkly romantic and suspenseful tale by a writer at the top of her game.