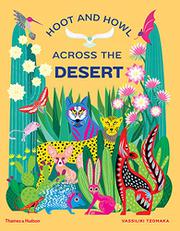 HOOT AND HOWL ACROSS THE DESERT

Life in the World's Driest Deserts

Creatively stylized images of flora and fauna native to some 15 deserts around the world.

Interspersing her examination with closer looks at camels and at sand dunes, the bird communities associated with acacia trees, and like intriguing sidelights, Tzomaka poses groups of select residents from all three types of desert (hot, cold, and coastal) against sere backdrops, with pithily informative comments on characteristic behaviors and survival strategies. But significant bits of her presentation are only semilegible, with black type placed on deep blue or purple backgrounds. And rarely (if ever) have desert animals looked so…floral. Along with opting for a palette of bright pinks, greens, and purples rather than natural hues for her flat, screen-print–style figures, Tzomaka decorates them with contrasting whirls of petals and twining flourishes, stars, scallops, pinwheels, and geometric lines or tessellations. Striking though these fancies are, artistic license has led her into some serious overgeneralizations, as she claims to be drawing on regional folk motifs for inspiration—justifying the ornate ruffs and borders on creatures of the Kalahari with a vague note that “African tribes make accessories and jewelry…decorated with repeated lines, circles and dots,” for instance, and identifying a Northwest Coastal pattern on an arctic fox as “Inuit.” Readers may find less shifty footing in more conventional outings like Jim Arnosky’s Watching Desert Wildlife (1998).

A promising debut spoiled by a design issue and cultural insensitivity.