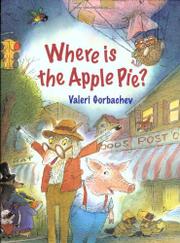 WHERE IS THE APPLE PIE?

From Gorbachev (Nicky and the Big, Bad Wolves, 1998, etc.), an evanescent cumulative story that takes readers on a treasure hunt that ends before the treasure—an apple pie—is recovered. A billy goat is strolling along the lane when its neighbor, the pig, issues a greeting and asks where the goat has been. The goat replies that he has been to the bakery, where he bought an apple pie, but robbers stole it. “Where are the robbers?” asks the pig, launching a call-and-response session as the goat’s one-line answers trigger further one-line queries from the pig. That pie has been carried into a forest that burns, and out into a lake, across the desert, and all the way to horizon through fog and wind. For most spreads, the goat and pig chat companionably on one page while opposite it, the pie’s adventures are transpiring, complete with thefts, forest fires, wind storms, and camels drinking their fill. The pig tenders a final summary of all that went before, as meanwhile the entire cast of characters amass. “So where is the apple pie?” Not here. The pace is crisp, the punch line a breeze, and the whole package is lighter than pie crust; children will pick up the pattern of the chatter quickly and join in the pig’s questions at story hours. (Picture book. 4-8)