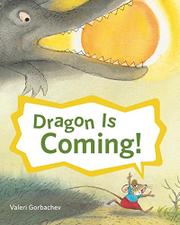 Farm mouse does a Chicken Little. Dog’s lying in the field, idly watching the fluffy clouds. A dark cloud rolls in and Dog comments that it looks like a dragon; when Mouse hears this, he’s off like a rocket, warning the other farm animals of the hideous fire-breather that’s about to attack them. The Goose Brothers, the Sheep Twins, Mrs. Cow and Mrs. Pig all abandon their chores to race to the safety of the barn. With each meeting, Gorbachev’s pen-and-ink–and–watercolor illustrations show the ominous dragon looming in the sky above the animals as they flee, growing in detail from dragon-shaped cloud to terrifying monster. They wait in the barn in fearful silence, until the door squeaks open and ... Dog enters, carrying an umbrella. He explains about the storm, which news passes gently from the animals to Mouse. Despite the abrupt ending, the author’s message registers via the expressive faces of his animals (who wear clothes) and a minimal, accessible text. Heather Tekavec’s Storm Is Coming!, illustrated by Margaret Spengler (2002), does much the same thing, with a bit more flair. (Picture book. 3-5)