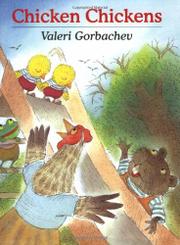 This confidence-builder from Gorbachev may put a few bees in the bonnets of youngsters who feel a bit timid around the playground. Brisk pen-and-wash illustrations tell the story of two little chicks and their first visit to the playground. They take a small tour and stand agog before such terrifying marvels as the seesaw, the merry-go-round, and the swings. At each stop, young animals invite them to join in the merrymaking, but the chicks beg off by saying, “We’re just little chicks.” Until they get to the slide, that is, and they are issued a modest challenge: “We’re little too,” said the frogs and mice, “but we’re not afraid. Come on, give it a try.” They scamper up the ladder, but their resolve fails them as they view the great sweep of polished metal from the top. A helpful beaver tells them to hop on his tail and down they ride with a “whee” on their beaks (and their eyes shut tight). A playground act of ice-breaking support is a gift that any child can learn to give. Gorbachev makes the suggestive point without getting preachy, and her two chicks cut such pathetic figures that young readers will be rooting for them from the first. (Picture book. 2-5)