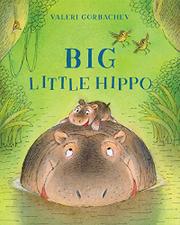 Little Hippo is smaller than everyone in his family, and he’s smaller than all of the other nearby animals, too. He’s not happy about this and isn’t comforted by his mother’s assurance that he will be big one day, too. Then he happens upon a tiny beetle that is flipped over on its back and sets it right. “Thank you Big Hippo!” the baby beetle’s family calls out, and Little Hippo rejoices that someone’s called him big. He runs past all of the other animals whose largeness had made him feel small, proclaiming, “I’m big now!” until he reaches his family and tells them about his bighearted good deed. Proud Mommy hippo praises her little one and dubs him Big Little Hippo, much to his delight. Gorbachev’s watercolor-and-ink illustrations are largely redundant of his well-structured text’s events, but they make excellent use of scale and perspective to underscore whether (Big) Little Hippo feels small or big from one spread to the next. The story has just the right amount of predictability and repetition to engage young readers and encourage participation.

Sure to be a big hit at storytime for little ones.