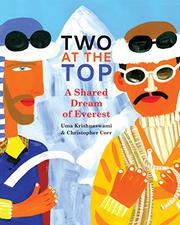 TWO AT THE TOP

A Shared Dream of Everest

Tenzing Norgay, who is ethnically Sherpa, grew up herding yaks in Nepal.

Edmund Hillary, a White man, grew up in New Zealand, where he helped care for his father’s bees. Norgay grew up in the shadow of Chomolungma, the mountain that English speakers call Mount Everest. Throughout his childhood, he climbed the nearby Himalayas, always dreaming of summiting the highest peak. Hillary was a dreamer too, a boy who walked barefoot to school in all weather, forever hoping for adventure. While Norgay’s family affectionately scoffed at his dreams, Hillary’s brother accompanied him on some of his earliest mountaineering expeditions in New Zealand. Hillary gained climbing practice when he served in New Zealand’s air force, then with his parents while vacationing in the Swiss Alps. Norgay, on the other hand, gained climbing practice accompanying the many tourists who visited Nepal and wanted to see the Himalayas. Although these two men led disparate, distant lives, their love of mountaineering brought them together in 1953, when they became the first team to ever climb to the top of Chomolungma. This lyrical, clear, and narratively sophisticated picture book alternates between the voices of Norgay on the left and Hillary on the right until they meet. Each sentence is beautifully crafted and a pleasure to read. Corr’s stylized, painterly illustrations burst with color and energy, wonderfully balancing the finely rendered text. (This book was reviewed digitally.)

A fitting celebration of the first pair of mountaineers to summit Everest.