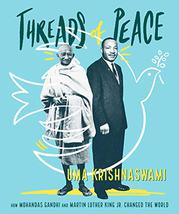 The threads of the lives of Mohandas Karamchand Gandhi and Dr. Martin Luther King Jr. are intricately woven together and continue to hold relevance today; even though they never met, Gandhi was well aware of racial inequality in the U.S., and King was deeply influenced by Gandhi’s philosophy of nonviolence. The book begins with Gandhi’s life, followed by King’s, tracing each man’s story from birth to assassination. Details about their early years and very human struggles round out the portraits of their lives. Krishnaswami also gives readers context about their assassins, Nathuram Vinayak Godse and James Earl Ray, humanizing them as well. This in-depth look at the modern histories of India and America with a focus on their most well-known civil rights leaders concludes by drawing explicit comparisons to present-day struggles to bring their visions of justice and equality to fruition in both countries. Ample photographs help readers picture the individuals and their times, and text boxes provide background information, such as about India’s caste system and the Vietnam War. The book’s attractive design, lucid text, and carefully chosen details combine to create an inviting and original treatment of its subjects.

History has been carefully intertwined with the present in this engaging and reflective book.