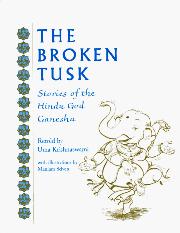 Stories of the Hindu God Ganesha

Krishnaswami's retellings of Hindu myths from India about the elephant-headed god, Ganesha, which include variants of tales heard in childhood or found in later research, make an elegant and eminently readable volume that's a vital addition to any multicultural shelf. Useful prefatory sections on the whole of Hindu mythology point out that the stories continue to be living cultural and spiritual entities in a way that tales from Greek or Norse mythologies are not, aiming to inculcate a way of life that includes ideas from the Hindu faith. The focus on Ganesha happily clarifies the swirling complexity of Hindu tradition while also enabling readers to empathize with this most likable and humorous god. The question that springs immediately to many readers' minds- -why an elephant's head?—is entertainingly addressed in the first tale, along with the notions of reincarnation and filial responsibility. The latter notion expands in the next story, a clever narrative dealing with the relationship of child to parent. The book also includes one tale, ``The Birth of Phagpa,'' from the Buddhist tradition of Mongolia. Throughout, black-and-white illustrations depict Ganesha's childlike charm, even when he's under duress or stress, or in the throes of heartbreak. This book opens perceptual doors to a great and still vital Eastern tradition—a gift indeed. (pronunciation guide, lists of characters and Ganesha's names, glossary, sources) (Fiction/folklore. 10+)