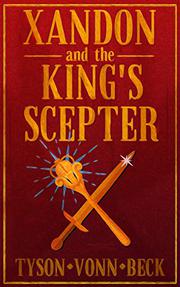 XANDON AND THE KING'S SCEPTER

A middle-grade fantasy adventure story about a gifted boy who trains to be a knight and gets entangled in a murder mystery.

Life is a series of toils for 12-year-old Xandon, an orphan and servant for a wealthy, cruel family in the kingdom of Avondale. His only respite is his warm relationship with animals, including a Berune tiger named Kumata, whose death opens the narrative. Shortly afterward, Xandon sees a wisp, a magical entity that’s said to be a spiritual messenger—and a bad omen for those who see it, and the young boy leaves his farm life behind to train in a guild as a knight, helping him avoid the new compulsory conscription laws passed by the power-hungry Prince Val Haruk. En route to his new life, he meets a young woman named Persephone whose mother, a powerful Archmage of the kingdom of Avondale, sponsored his entry into the guild. The pair become fast friends, and debut author Vonn Beck, in this series starter, uses their relationship to usher readers into the wider world and mythos he’s constructed, as Persephone explains elements of the kingdom and the way magic functions to Xandon, hinting that although the young boy may not be a mage, he’s most certainly “something” unusual. The account of Xandon’s training regimen goes on a bit too long and slows the narrative momentum. However, things pick up after a killing occurs in the guild hall, and the resulting mystery shifts the novel into an intriguing new register as Xandon becomes a suspect. Throughout, the protagonist is a likable character who seems ambitious, bright, and curious, and Vonn Beck unveils the wider political machinations at play in a deft and creative manner. When Xandon meets the wily Prince Val Haruk, who tries to draw the young man into his dark schemes, the story truly hits its stride. Taut action scenes, particularly toward the book’s climax, show off the author’s talent for depicting realistic combat without getting bogged down in clichés.

A promising start for a planned fantasy series that capably handles both politics and magic.