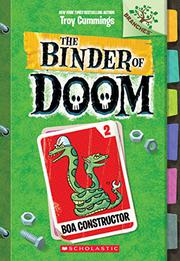 From the The Binder of Doom series, volume 2

In the second installment of the Binder of Doom series, readers will reconnect with Alexander Bopp, who leads the Super Secret Monster Patrol, a group of mutant children who protect the citizens of their beloved town of Stermont.

His friends Nikki and Rip rejoin him to add new monsters and adventures to their ever growing binder of monsters. As in series opener Brute-Cake (2019), Alexander and his friends attend the local library’s summer program, this time for “maker-camp.” They are assigned a Maker Challenge, in which each camper is to “make a machine that performs a helpful task”; meanwhile, mechanical equipment is being stolen all over Stermont. Unfortunately, the pacing and focus of the book hop all over the place. The titular boa constructor (a two-headed maker-minded snake and the culprit behind the thefts) is but one of many monsters introduced here, appearing more than two-thirds of the way through the story—just after the Machine Share-Time concludes the maker-camp plotline. (Rip’s “most dangerous” invention does come in handy at the climax.) The grayscale illustrations add visuals that will keep early readers engaged despite the erratic storyline; they depict Alexander with dark skin and puffy hair and Nikki and Rip with light skin. Monster trading cards are interleaved with the story.

Returning fans will be happy to see their friends, but this outing's unlikely to win them new ones.