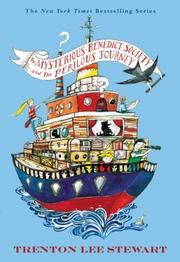 THE MYSTERIOUS BENEDICT SOCIETY AND THE PERILOUS JOURNEY

The seemingly ordinary young members of The Mysterious Benedict Society (2007) reunite for another grand adventure, though the author’s mannered prose style, his habit of explaining things that need no explanation and his protagonist’s compulsive need to ruminate over the ethics of every action may wear down less patient readers. When beloved sponsor and narcoleptic genius Nicholas Benedict goes missing, Reynie, Kate, Sticky and now-three-year-old Constance set out to the rescue. Fortunately, Benedict has left a trail of not-too-cryptic riddle/clues to follow. Unfortunately, his evil twin Ledroptha Curtain and minions are usually a step ahead. Also unfortunately—for the story, at least—the author trots in so many grown-ups to help the young folk along that in the end their own abilities only fitfully come into play. The rescue is ultimately accomplished, although as Curtain escapes, there may well be more outings for the Society down the road. Though still entertainingly quirky, this second doorstopper episode has more of an air of trading on the previous one’s cleverness than building on it. (Fiction. 11-13)