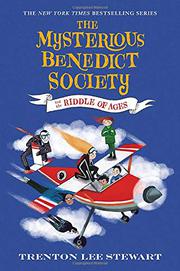 THE MYSTERIOUS BENEDICT SOCIETY AND THE RIDDLE OF AGES

When deadly minions of archvillain Ledroptha Curtain escape from prison, the talented young protégés of his twin brother, Nicholas Benedict, reunite for a new round of desperate ploys and ingenious trickery.

Stewart sets the reunion of cerebral Reynie Muldoon Perumal, hypercapable Kate Wetherall, shy scientific genius George “Sticky” Washington, and spectacularly sullen telepath Constance Contraire a few years after the previous episode, The Mysterious Benedict Society and the Prisoner’s Dilemma (2009). Providing relief from the quartet’s continual internecine squabbling and self-analysis, he trucks in Tai Li, a grubby, precociously verbal 5-year-old orphan who also happens to be telepathic. (Just to even the playing field a bit, the bad guys get a telepath too.) Series fans will know to be patient in wading through all the angst, arguments, and flurries of significant nose-tapping (occasionally in unison), for when the main action does at long last get under way—the five don’t even set out from Mr. Benedict’s mansion together until more than halfway through—the Society returns to Nomansan Island (get it?), the site of their first mission, for chases, narrow squeaks, hastily revised stratagems, and heroic exploits that culminate in a characteristically byzantine whirl of climactic twists, triumphs, and revelations. Except for brown-skinned George and olive-complected, presumably Asian-descended Tai, the central cast defaults to white; Reynie’s adoptive mother is South Asian.

Clever as ever—if slow off the mark—and positively laden with tics, quirks, and puns.