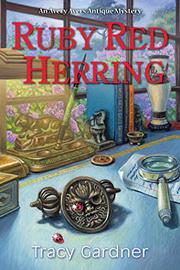 A fabulous gemstone is a magnet for murder.

In a rousing series debut, Gardner introduces 25-year-old Avery Ayers and her sister, Tilly, a high school senior, who are still recovering from the deaths of their parents in a car accident almost a year ago. While their Aunt Midge is sharing their suburban New York home, they also use her apartment in Manhattan, where Avery has taken her parents’ place at their art and antiques appraisal business. When a note in their father’s handwriting is slipped through their mail slot, they’re all deeply disturbed. The note says, "You must decline the contract. Your life is at stake." The note may refer to a job Avery is planning to start that day, authenticating a stone for the Museum of Antiquities. The stone, owned by a reclusive man who claims to have found it at a flea market in Munich, may be a priceless ruby or a much less expensive spinel—and it might even be a famously missing ruby from the museum's most important piece, the Emperor's Twins medallion. Avery discovers that her parents had worked on authenticating the remaining ruby eye in the Emperor’s Twins medallion just before their deaths and notices odd things such as the fact that the case of her parents’ deaths has not been closed by the police. Avery receives another mysterious note telling her to find someone named Art at the museum. Art Smith turns out to be a remarkably closemouthed police detective masquerading as one of the guards protecting the gem. After searching through the papers her parents stored at home, Avery is attacked and her aunt’s dog injured by a violent intruder. Now she can only trust her family and the attractive detective as they work to solve the puzzle of the ruby and discover who is willing to kill for it.

A lively combination of mystery, romance, and gemology that will appeal to fans of Jane K. Cleland and Paige Shelton.