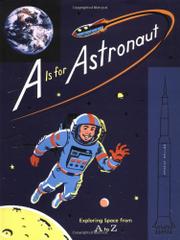 A IS FOR ASTRONAUT

Exploring Space from A to Z

A mixed bag of stock outer space–themed images, familiar archival photographs and colorful retro-feeling illustrations are partnered with the alphabet to introduce young readers to a wide variety of space topics, ranging from freeze-dried ice cream to Yuri Gagarin, the first human space traveler. Each letter, presented in alphabetical order, is allotted at least its own full page, and some letters, like E, which represents Earth, get entire double-page spreads. Each letter introduces from one to three space topics, which each feature an image and corresponding short descriptive statement. Some statements are silly, like “golf balls left on the Moon by astronaut Alan Shepard,” while others are serious, such as “Flares: bursts of energy that flash from the Sun.” Although the short statements could be more substantive together with the accompanying images, this text presents just enough information to launch young readers into a quest for deeper knowledge. (Picture book. 4-7)