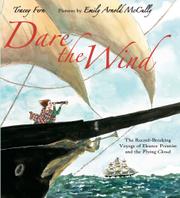 The Record-Breaking Voyage of Eleanor Prentiss and the Flying Cloud

A lively, true story about a 19th-century woman and the 15,000-mile sailing journey she navigated.

With animated language full of the vigor of the sea itself, Fern relates the story of Ellen Prentiss Creesy, who, while growing up in Marblehead, Mass., was taught to both sail and navigate by her sea-captain father. Later, Ellen accompanied her husband, also a sea captain, on many voyages as navigator. Ellen’s husband was given command of the Flying Cloud, a clipper ship whose 1851 maiden voyage—from New York City around the tip of Cape Horn to San Francisco—aspired to bring passengers and cargo to the Gold Rush more quickly than had ever been done before. With Ellen as navigator, the Flying Cloud endured storms and doldrums to triumph in its record-setting voyage. McCully’s expertly rendered watercolor illustrations evoke, in double-page spreads, the rich atmosphere of the sea in all its moods, while many events are shown as round vignettes—as though seen through a spyglass. Off-kilter horizon lines conjure up the motion of the ship at sea, and sailing-savvy readers will appreciate the accurate depiction of all things nautical. Endpapers showing the Flying Cloud’s sailing route orient readers to the huge scope of the voyage.

As stimulating as sea air itself, this story will surely send the salt water coursing through the veins of its readers.