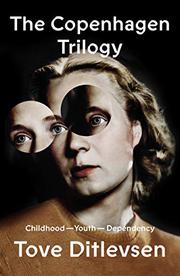 The noted Danish novelist and poet delivers a rueful, self-excoriating account of a life of self-doubt, misery, and addiction.

“I do whatever I can to please him, because I’m so thankful he married me. Although I know something still isn’t quite right, I carefully avoid thinking about that.” So writes Ditlevsen in the third part of this autobiographical trilogy, written between 1969 and 1971. It’s not so much that she was dependent on the men in her life, none of them quite right for her, but instead on the drugs and alcohol that overtook her. One partner who injected her muttered that her veins were clogging up, adding, “Maybe we can find one in your foot.” Ditlevsen traces an unhappy present—much of the later narrative is set at the time of the German defeat in World War II, the streets of Denmark’s capital full of child soldiers in Wehrmacht uniforms—to a childhood of discouragement (her father insisted that “a girl can’t be a poet”) and a youth in which she was convinced that she was “condemned to loneliness and anonymity.” For all the self-doubt and later chemical abuse, however, she did rise as a poet even if getting published was full of the usual roadblocks—and more, as when she writes that an editor who accepted her work “pats me on the behind, absent-mindedly and mechanically.” A rare humorous moment comes when, after drunkenly choking down a fistful of methadone pills, she asks the visiting English writer Evelyn Waugh what brought him to Denmark: “He answered that he always took trips around the world when his children were home on vacation from boarding school, because he couldn’t stand them.” Given the mostly grim revelations in her book, it’s small wonder that Ditlevsen came to an unhappy end, though not before publishing some of the most memorable works in modern Danish literature.