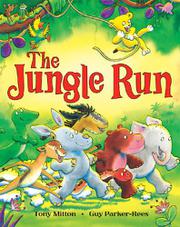 Free-spirited artwork with colors of psychedelic intensity smooths the rather fitful nature of this race through the jungle.

The animals are getting ready for the jungle run. There’s a hippopotamus, a rhinoceros, an elephant and other major players in the bestiary, so when “Cub turns up to take her place, / …the others say, ‘You’re too small to race.’ ” But the rhyming text is too light-hearted to throw much of a wet blanket on the proceedings, and the cub proves to be an adept at the various obstacles on the course, quickly pulling into the lead as the python and gazelle get tangled in the vine net. At the rope swing, Cub makes like a pendulum while Elephant misses altogether and falls in the creek. The others use his sizeable noggin as a stepping stone, which seems a little unsporting. At the waterslide, Cub is suddenly found riding Elephant’s back. Wasn’t Cub well in the lead, calling an inauspicious “You can’t catch me!” over her shoulder, as if tempting the Gingerbread Man’s fate? Cub does win the race through no fault of her own, and the whole event becomes a distant afterthought to Parker-Rees’ illustrations, with their cool jungle landscapes and radioactive colors. A joyful camaraderie closes the book, a welcome counterpoint to its earlier exclusivity, if another touch of randomness.

Fun for one or two reads, but, unlike Cub, it probably won't have much staying power.