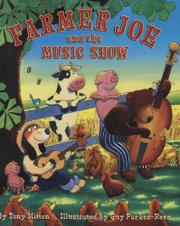 FARMER JOE AND THE MUSIC SHOW

by Tony Mitton and illustrated by Guy Parker-Rees

Mitton’s modest, if mildly agreeable, contribution to the barnyard-hoedown genre opens with a bad case of malaise on Farmer Joe’s spread. But readers will know something’s cooking, even before Farmer Joe breaks out his guitar, because Parker-Rees’s palette comprises the same colors associated with the stuff that gets piped onto birthday cakes, and the barnyard animals, who strike poses of sophisticated ennui, clearly know a good time when it bites them on the knee. Out come the instruments in cumulative fashion, each inspired by the one before, and the farm gets back in operation, for music shows the way to happiness and contentment. The basic rhythm has swing—“The crops like the music. Me-oh-my! / Look at them stretching up to the sky”—and plenty of onomatopoeic oomph—“Doom-doom-doo”—though readers may wince at such clunky rhymes as “idea / cheer” and “yee-har / guitar.” Ultimately the book falls short of the panache of other barnyard merriments, such as Martin Waddell’s The Pig in the Pond, illustrated by Jill Barton (1992). (Picture book. 3-5)