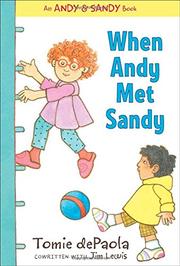 From the Andy & Sandy series

DePaola and Lewis’ new early-reader series features a boy and girl who become fast friends in the first book and go on to have adventures there and in the second book, too.

When Andy goes to the playground, he sees a new girl there, and she sees him, too. The two children are different from each other in appearance and temperament: Shy Andy has light brown skin and dark, straight hair, while exuberant Sandy has curly ginger hair and fair skin. In a move reminiscent of Chris Raschka’s Yo! Yes? (1993), excellent book design positions the children on facing pages with the gutter separating them until they become friends. This allows the physical book to reinforce their initial reticence while also clearly delineating which thoughts in the text belong to which child as they individually play on different playground equipment. A seesaw ultimately unites them since they need each other to make it work. The second title, Andy & Sandy’s Anything Adventure, finds Andy and Sandy, now fast friends, engaged in indoor play that culminates in dress-up shenanigans. The soft colors and distinctive stylized art from dePaola will immediately attract fans, but the sweetness of this friendship and the accessibility of the text are what will keep new readers loyal.

Good to meet you, Andy and Sandy.