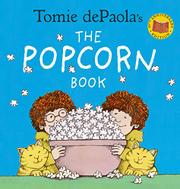 Curious, shaggy-haired twins Tony and Tiny learn about the history of popcorn while waiting for a pot of kernels to pop.

First published in 1978, this 40th-anniversary edition updates the depictions of Indigenous people and expands upon the presentation of historical facts as Tony gets a pan hot and ready for popcorn while Tiny tells his brother (and readers) about the history of the food. This version is cleaner and brighter, with more saturated colors and modern type. The European (French, Spanish, and English) colonizers’ perspective of popcorn history is de-emphasized, and more agency is given to Indigenous peoples. This version does a good job of including more Native Nation–specific facts about popcorn and its preparation, with lines such as, “The Ho-Chunk, also known as the Winnebago, were particularly fond of oiled popcorn on the cob.” That being said, even though Tony and Tiny, two white boys, live in the present, all references to Indigenous peoples are in the past; this was a missed opportunity to include present-day Indigenous peoples’ relationships to corn/popcorn. Also, the original stereotypical illustration of a brown-skinned, angry “little demon” inside a kernel is woefully present in this version, although the text has been edited to say “little man”; rather than the original “The Indian people had a legend,” the text now reads “Some people tell the story,” which implies that the origins of this “legend” are hazy.

Readers familiar with this book will delight in a fresher-looking version, but overall and despite good intentions, it does not completely rehabilitate the original’s flawed depictions of Indigenous peoples.