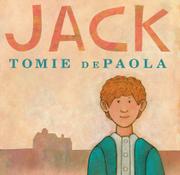 A new tale from dePaola is always a reason to cheer, and this riff on “Jack” tale variants will bring smiles.

In this cumulative folk tale, Jack lives on a tiny farm with his grandpa. He tells his grandpa that he wants new friends and to live in the city, and off he goes. Along the way, he encounters a series of animals that join him on the journey—11 to be exact. Chick, duck, goose, dog, frog, pig, cow, cat, sheep, horse and owl (and a crow that’s unmentioned in the text but nevertheless makes a lot of noise) parade along behind Jack to the king’s castle. When Jack requests a house in the city for him and his friends, the king says he has a perfect house, though it “might need some fixing up.” The decrepit, boarded-up building makes that quite an understatement, but Jack and company tackle the rehab with gusto. Voilà, a bright fuchsia house with a window for each of the animals. DePaola eschews a traditional happily-ever-after ending with tongue-in-cheek comments from an old man and old woman: He grumbles, “There goes the neighborhood.” And she chuckles, “It’s about time!” Repeated rubber stamps of each animal’s sound (and individualized colors) add zip (and noise) to dePaola’s signature style and palette.

Adults who have been through the ordeal of a fixer-upper may appreciate the ending more than kids, but everyone will enjoy the fun.