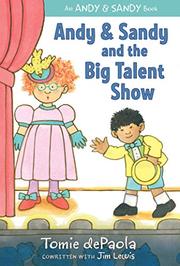 From the Andy & Sandy series, volume 4

A case of stage fright nearly thwarts Andy and Sandy’s act in this latest installment of dePaola and Lewis’ early-reader series.

When friends Sandy, a tall, ginger-haired white girl, and Andy, a short boy of color with light-brown skin and dark hair, find out about an upcoming talent show, Sandy is very excited to participate. Andy, on the other hand, is less than enthusiastic. While Sandy revels in the possibilities of juggling, tumbling, and hula-hooping, Andy has no talent for such acts. Sandy, ever the encouraging friend, offers to teach him to dance, and he tries to keep up with her. But when the big day arrives, it’s Sandy who freezes on stage and Andy who dances his heart out. Sandy eventually joins him as he gently jostles her about in a series of wordless spreads, resulting in a first-prize win for the pair at the show. Throughout, controlled text with just the right amount of repetition will bolster emergent readers’ access and comfort with decoding, and dePaola’s recognizable style will do the same in pictures that reinforce and expand the verbal story’s content.