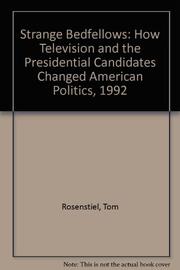 How Television and the Presidential Candidates Changed American Politics, 1992

An episodic appraisal of how network TV in general and ABC-TV in particular covered last year's presidential campaign. If longer on detailed vignettes than substantive analysis, the savvy text still affords insight into the ways that a major news-gathering outfit strives to propitiate constituencies—ranging from its sources to the viewing public. Starting from the premise that it's impossible to understand US politics without a grasp of domestic TV, Rosenstiel (a media reporter for The Los Angeles Times) turns the tables on ABC's minions, offering an up-close-and-personal take on how they conducted themselves and met their putative responsibilities during a lengthy campaign that started well before the primaries and was far from over on election eve. Among other matters, he recounts how the network and its rivals initially resolved to provide serious, issue-oriented reportage, eschewing sound-bite sensationalism and resisting manipulation by candidates whose handlers were on to the tricks of the TV trade. These good intentions came a cropper, Rosenstiel notes, in part because the nominees learned to bypass the networks and deal with local affiliates or appeal directly to the electorate through nontraditional outlets (like talk shows). In addition, he points out, reformist instincts were overtaken by such events as allegations concerning Clinton's draft record and womanizing, as well as by Perot's bent for politically suicidal pronouncements. Dismissing any notion that print or TV journalists were fundamentally biased in their coverage of the campaign, Rosenstiel nonetheless taxes both branches of the fourth estate with underestimating their audiences—which, he says, do want hard information because they take politics seriously. He closes with the tantalizing, albeit unprobed, conclusion that the broadcast medium had best supply this demand or risk replacement as the nation's dominant source of news. An absorbing retrospective that raises as many questions as it answers.