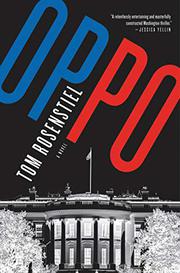 Political observation in a thriller's guise.

Rosenstiel's (The Good Lie, 2019, etc.) new novel, like his last, twines around up-to-the-minute political concerns, in this case, the effects of big money on politics. Wendy Upton, senior senator from Arizona, may be the world's last centrist; at least it seems that way when she is asked, on consecutive days, to be the vice presidential candidate by the campaigns of front-running presidential contenders of opposing parties. Then this fulcrum candidate is threatened: She's told to drop out or her life will be ruined. The call goes out to Rena, Brooks & Associates, consultants, to try to discover and neutralize whatever dirt the threatener possesses. Peter Rena and Randi Brooks have a few new associates this time around, and as the team researches Upton's life, Brooks and Rena explain to their inexperienced new colleagues the changes wrought in electoral politics by the Citizens United decision and the inrush of nearly unlimited money. Their work results in an "opposition book," which is essentially an in-house compilation of all the background that an opposition campaign might uncover, thus avoiding nasty surprises and possibly averting or diluting any public relations issues. Sure enough, Sen. Upton has a few skeletons in her closet, which of course she attempts to conceal, but only a very few, barely enough to keep her human, and the team next concentrates on discovering who might want to threaten her. Big money plays a role as Rosenstiel clearly connects the dots linking wealth to the corrupt manipulation of public policy. Rena and Brooks are as amiable as ever, their expanded associates as clever and more diverse than ever, and the threats posed by unrestrained political money are clearly descried, but the ride could be more compelling.

Admirable and sharp political analysis afloat in a lukewarm thriller.