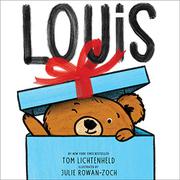 A hug is a powerful thing.

Louis, a stuffed teddy bear, has grievances: His owner, a dark-haired kid with light-brown skin, has mistreated Louis in a variety of ways, including using the bear as a hankie, burying the toy in the sand, and subjecting him to the terrors of the washing machine. After Louis suffers the final indignity—almost being left behind on public transportation—the bear plans to make his escape. Savvy readers may surmise that Louis’ heart isn’t completely in this grand departure, as the teddy delays based on rain, cupcake-filled tea parties, and being the star of show-and-tell due to bravery during the bus incident. When the perfect moment to desert finally arrives, a last-minute hug helps Louis realize how much the kid loves and appreciates him. It’s a charming, genuinely sweet ending to a well-crafted story that leaves lots of openings for Rowan-Zoch’s boldly colored, crisp cartoon artwork to deliver a vibrant pop that will be appreciated in both large storytimes and intimate lap reads. Louis is marvelously expressive, panicking, glaring, and unexpectedly softening by turns. Caregivers and educators may see an opportunity in the story to engage in creative writing or storytelling based on the readers’ own favorite stuffed friends. Louis’ owner’s mom appears in one scene wearing a salwar kameez, suggesting the family is of South Asian heritage.

Like a faithful teddy, sure to become a favorite for many readers.