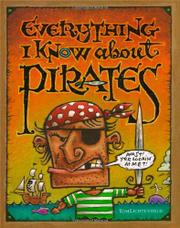 EVERYTHING I KNOW ABOUT PIRATES

Accurately subtitled “A collection of made-up facts, educated guesses, and silly pictures about bad guys of the high seas,” this study affirms many popular misconceptions about these archetypal villains. It clears up plenty of mysteries too, such as what pirates eat (weevils, maggots, and food stolen from fish schools) or why (besides terminal clumsiness) so many are one-eyed, one-handed, and peg-legged. Lichtenheld also describes pirate fashion in detail, from boots (“Ventilated to prevent toe crud”) to hair styles, presents a gallery of historical skull and crossbones alternatives (“Hot dog and crossbones, 1620”), then caps the narrative with a chart of pirate-like monikers and a glossary (“Buccaneer. 2. How much a pirate pays to get his ears pierced”). Ingenious, sometimes gross, and illustrated with cartoony views of leering plug-uglies, this makes a fine companion to Colin McNaughton's Captain Abdul's Pirate School (1994) or, for readers who prefer somewhat straighter stuff, such alternatives as Richard Platt's Eyewitness title, Pirates (not reviewed). (Picture book. 7-10)