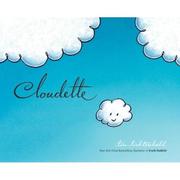 Lichtenheld takes a charming turn with the "tiny but mighty" theme. Cloudette usually enjoys being small—she can cavort with birds and kites, and hide between skyscrapers. But she’s wistful when other clouds do big things, like create cold fronts and water crops. Her imagination yields lots of wishes, depicted in ink-and-watercolor spot illustrations. “[S]he thought nothing would be more fun than giving some kids a day off from school,” accompanies a snowscape with banks billowing up to the windows of the school and buses clearly going nowhere. No one seems to need a little cloud, but when she’s blown clear out of her neighborhood, she’s welcomed by new friends—an eagle, a bear and fluffy cumuli. She spies a frog in a former pond, now just a puddle of cracked mud, and has a helpful “brainstorm.” Lichtenheld’s depictions of Cloudette puffing herself up for a fulsome downpour will delight children, and funny turns of phrase (“Even the higher-ups were impressed”) will engage adults, too. The whimsy would nicely complement a preschool or primary weather unit. The author even uses rainwater for the watercolor pictures. (“Thank you, clouds,” he writes in the media statement.) Sweet and sunny. (Picture book. 3-7)