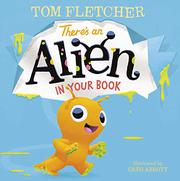 THERE'S AN ALIEN IN YOUR BOOK

From the Who's in Your Book? series

Earth friends are easy to make for this roly-poly, extraterrestrial cutie.

Fletcher pens the fourth in his interactive book series, this time invading his pages with a crash-landed ET. At first readers are encouraged to tell the space being to shove off, but pretty quickly it becomes clear that it’s just too adorable to send away like that. Mostly yellow, it looks like nothing more than a smiley face with antennae, its oversized head occupying more volume than its trunk, arms, legs, and tail combined. The undersides of its hands, feet, and tail are bright green. Repairing its damaged spaceship is out of the question, and attempts to launch it into space by having readers bounce, turn, and lift the book are fruitless. Does it belong here? Well, when readers stop to consider all the creatures that live on this planet (including a cameo by the author in the art), we can recognize that “we’re all weird and wonderful.” So the alien stays and even makes a friend with the star of There’s a Monster in Your Book (2017). The story makes mild overtures toward the idea of embracing our differences no matter our appearance, but that’s all superseded by the interactive elements. By now the series is treading familiar ground, but fans will find the combination of cute creatures and gentle moralizing a comfort.

Not exactly out of this world but a pleaser just the same.