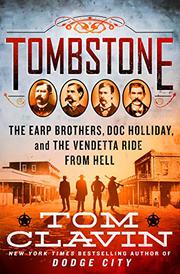 The Earp Brothers, Doc Holliday, and the Vendetta Ride From Hell

Rootin’-tootin’ history of the dry-gulchers, horn-swogglers, and outright killers who populated the Wild West’s wildest city in the late 19th century.

The stories of Wyatt Earp and company, the shootout at the O.K. Corral, and Geronimo and the Apache Wars are all well known. Clavin, who has written books on Dodge City and Wild Bill Hickok, delivers a solid narrative that usefully links significant events—making allies of white enemies, for instance, in facing down the Apache threat, rustling from Mexico, and other ethnically charged circumstances. The author is a touch revisionist, in the modern fashion, in noting that the Earps and Clantons weren’t as bloodthirsty as popular culture has made them out to be. For example, Wyatt and Bat Masterson “took the ‘peace’ in peace officer literally and knew that the way to tame the notorious town was not to outkill the bad guys but to intimidate them, sometimes with the help of a gun barrel to the skull.” Indeed, while some of the Clantons and some of the Earps died violently, most—Wyatt, Bat, Doc Holliday—died of cancer and other ailments, if only a few of old age. Clavin complicates the story by reminding readers that the Earps weren’t really the law in Tombstone and sometimes fell on the other side of the line and that the ordinary citizens of Tombstone and other famed Western venues valued order and peace and weren’t particularly keen on gunfighters and their mischief. Still, updating the old notion that the Earp myth is the American Iliad, the author is at his best when he delineates those fraught spasms of violence. “It is never a good sign for law-abiding citizens,” he writes at one high point, “to see Johnny Ringo rush into town, both him and his horse all in a lather.” Indeed not, even if Ringo wound up killing himself and law-abiding Tombstone faded into obscurity when the silver played out.

Buffs of the Old West will enjoy Clavin’s careful research and vivid writing.