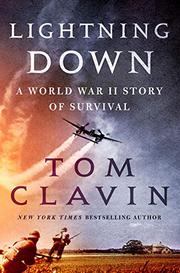 The journalist and bestselling popular historian returns with the story of an American soldier who survived Nazi terror.

Generally, Allied POWs in Germany fared better than those in Japan—but not the group that included fighter pilot Joe Moser, Clavin’s subject for this scrupulous, squirm-inducing account. The author narrates from Moser’s point of view, and his sources include Moser’s 2009 memoir. Raised on a farm and fascinated by flying, Moser enlisted in May 1942, underwent the 21 months of training required for the P-38 fighter jet, and flew his first mission in April 1944. Moving back and forth between the big picture and Moser’s 44 missions, Clavin delivers a workmanlike account of the war that ends in August, when Moser’s plane was shot down over France and he was captured. It’s significant that he was taken to Fresnes prison near Paris, where Allied airmen were held, instead of being sent to POW camps. After liberation, in the scramble to evacuate Germany’s high command, a group of soldiers were labeled “terror bombers.” They were crammed into boxcars and shipped to Buchenwald, Germany’s largest concentration camp; by fall, they were starved and disease-ridden. However, when he learned about their plight, a Luftwaffe officer, offended at this illegal treatment of fellow flyers, arranged their transfer to a POW camp. Readers relieved that their ordeal was over will be shocked by what followed in January. With the Red Army approaching, authorities evacuated the camp, forcing prisoners to walk across Germany in a freezing winter with only the food they carried with them. More died than at Buchenwald before arriving at another camp far worse than the one they had left. With Nazi Germany on its last legs, they expected a short stay, but two months passed before liberation. Readers can then enjoy Clavin’s traditional concluding description of the remaining years of the lives of Moser and other major figures.