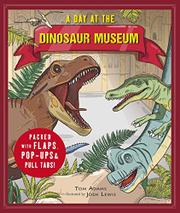 A DAY AT THE DINOSAUR MUSEUM

Pop-up dinosaurs, both fossilized and fully fleshed out, join Mesozoic contemporaries in a series of museum displays.

The single-topic spreads are up-to-date but designed to evoke the dusty atmosphere of old-style dinosaur halls (emphasizing this conceit, some are even labeled “Rooms”). They combine cramped blocks of information in smallish type with images of beasts and bones done in a style that resembles the faded naturalism of early-20th-century museum murals—or, in the “Fossil Room,” a desktop covered in paleontological notes with paper clips and coffee stains. Occasional inset spinners and attached booklets supply additional dino details. A tab-activated flipbook attempts to demonstrate tectonic drift, but readers have to go fairly slowly to assimilate it all, which blunts the effect. Amid pale silhouettes representing modern museum visitors, the prehistoric creatures, nearly all of which are small and drably colored, rear up individually or parade along in sedate, motley groups until a closing display and mention of genetic engineering promise a possible future with pet velociraptors.

It’s got a few quirky bits, but it’s lackluster overall.