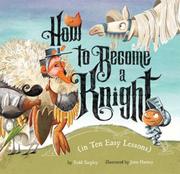 HOW TO BECOME A KNIGHT (IN TEN EASY LESSONS)

A comical guide to knighthood.

Sam wants to be a knight, so he seeks advice from Sir Simpleton—an apt name indeed. Sir Simpleton says he is a “professional dragon tamer, sword fighter, world explorer, and—this week—knight trainer!” Sir Simpleton proceeds to offer activity-appropriate advice through dialogue (“Get a bright, shiny suit of armor!”), which is then contradicted by his actions in the illustrations. This technique of humorous counterpoint between art and text is apparent in each spread as Sam is told to get the aforementioned armor while Sir Simpleton dons a feathery chicken suit of sorts, to get a “big, fast horse” while Sir Simpleton sits atop a small donkey, and so on. Sam follows the spoken advice and repeatedly challenges his mentor’s silly actions, inviting readers to align themselves with him in their superior knowledge. While this might provoke laughter, the book falls flat without much storytelling to hold it together, as Sam and Sir Simpleton both achieve knighthood by the book’s end but otherwise remain unchanged throughout the text. Sam is depicted as a young child of color and Sir Simpleton as a hulking, white behemoth.

Not a good knight book—but not a bad one either.