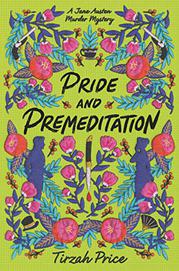 A young woman intent on a position in her father’s law firm plays sleuth in this mystery reworking of Pride and Prejudice.

When Charles Bingley, head of a local shipping firm, is accused of the murder of his brother-in-law, George Hurst, Lizzie Bennet inserts herself in the case in an effort to prove her worth beyond her potential success in securing a respectable marriage. Mr. Darcy, Wickham, Mr. Collins, Jane, Charlotte, and the extensive cast of source characters all appear here, altered and with different roles though generally retaining their personalities and idiosyncrasies. Readers familiar with Jane Austen’s work will get the most from this novel, but even for those who aren’t, the book stands on its own as a solid, if at times plodding, whodunit. Though not a modernization, there are modern sensibilities at play, discussed by Price in an author’s note and expressed in passages about class and sex roles that are much more expository than the original. This style of telling rather than showing extends across Lizzy’s relationships with both Wickham and Darcy, though descriptions of the former are also happily peppered with dryly witty dialogue. Most characters are White; Charlotte is biracial, with a White father and Black mother from the West Indies.

A slow-building tale of deception and struggle against societal bounds.