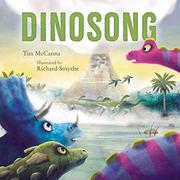 Modeled on their Watersong (2017) McCanna pairs a text composed nearly exclusively of sound-effect words to Smythe’s bright and sprightly views of a triceratops, an ankylosaurus, and a generic sauropod, all sporting smiles, googly eyes, and hides in glowing hues. They cross a log over a stream, lumber through a rocky landscape as thunder rumbles, and tumble into a dark cave to escape the eruption of a nearby volcano. Unlike the previous outing, the sounds sometimes seem oddly unsuited to the action on the page. It’s hard to figure, for instance, how “clank clack // crinkle crackle / clunk” sounds like an ankylosaurus rolling down a steep hill, or “Bang bowl / clang roll” evokes a boulder doing the same. (Maybe the author had a storyline involving robots in mind and the illustrator took an unexpected turn?) Still, there’s never a dull moment, until the cave opens out at its other end to reveal parental dinos in a peaceful setting: Ahh, “Safe and sound.” The author suddenly turns voluble, adding a closing page of remarks about dinosaurs, magma, the three kinds of rocks, what paleontologists do, and other scattered topics at least tangentially related to the mise en scène.

Definitely a rousingly rumbly ramble, but the seams are rough enough to trip over.