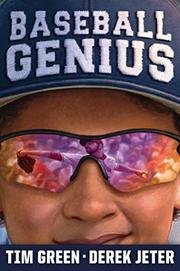 Hooking up with a renowned shortstop-turned-publisher, Green shows that the premise of his Football Genius (2007) plays just as well in another sport.

It’s not a straight remake, but Green does recycle select plot elements and character types along with said premise. Hot to play for the local 13-and-under Rockets despite its starting pitcher, who is both a bully and the favored son of the team’s brutal coach, Jalen steals a bag of autographed baseballs from aging Yankees’ superstar James Yager to peddle for the requisite $990. Caught, he escapes punishment by claiming so insistently that he can predict pitches that the skeptical but slumping Yager brings him to Yankee Stadium for a tryout. Jalen does have a gift, though it turns out to be a fitful one. Green’s biracial protagonist (white and black) leads a cast that includes a struggling single dad who speaks in a cheesy Italian accent (“I take-a you shoes off….You close-a the eyes”), a standard-issue spunky-girl pal, and an admixture of actual sports personalities and athletes—including the likewise biracial Jeter, who claims his shared title-page credit by offering encouraging platitudes in a gratuitous cameo. The tale offers plenty of sports action as it scrambles from base to base past sudden obstacles and personal challenges.

A bunt at best, but Green’s a good enough storyteller to keep readers in the game.