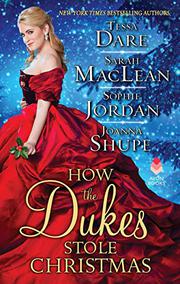 HOW THE DUKES STOLE CHRISTMAS

In the opening novella, Meet Me in Mayfair by Dare (The Wallflower Wager, 2019, etc.), James, the new Duke of Thorndale, demands payment of Louisa Ward’s father’s debt, which will render the family homeless. Louisa attends a holiday ball hoping to entice a wealthy suitor but attracts the attention of the duke himself, who finds her indifference to him appealing. They have a series of wintry adventures all over London, in the course of which she teaches him the importance of home. An homage to Meet Me in St. Louis, Dare’s irreverent story brings all of the optimism, romance, and wit of that beloved film to a Regency setting. MacLean’s (Brazen and the Beast, 2019, etc.) The Duke of Christmas Present is a second-chance romance wrapped in a Scrooge story. Eben (get it?), Duke of Allryd, is all work and no play. On Christmas Eve, having sent the servants away, he engages in his ritual of getting drunk and trying to forget the night 12 years ago when the love of his life, Lady Jaqueline “Jack” Mosby, left him. Having inherited a nearly bankrupt ducal estate, Eben kept Jack waiting too long for marriage while he rebuilt the family’s wealth. When Jack returns from a decade of world traveling, their intense longing draws them together while past hurts linger. An angst-y winner. In Jordan’s (The Duke’s Stolen Bride, 2019, etc.) Heiress Alone, Annis Ballister is stranded in the Scottish Highlands when her big, boisterous family returns to London without her. The surly, hermitlike Duke of Calder shelters Annis in his castle against brigands during a snowstorm. Soon, the duke is reconsidering his confirmed bachelorhood while Annis' ambition to become a nun melts in the heat of Calder’s rough embrace. Sexy, with a classic gruff Scottish hero who is a bit too pushy. Shupe's (The Rogue of Fifth Avenue, 2019, etc.) Christmas in Central Park finds popular columnist Rose Walker in a bind when her newspaper’s owner, Duke Havermeyer III, asks her to prepare a holiday dinner for the board of directors. Although she poses in print as a Gilded Age Martha Stewart, Rose is single, of modest means, and domestically uninclined. The romance is rushed, but the story is amusing and sweet.

The first two novellas, brimming with the magic of holiday romance, are worth the price of the book.