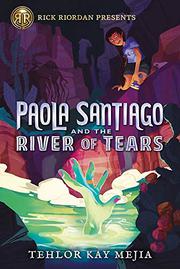 PAOLA SANTIAGO AND THE RIVER OF TEARS

From the Paola Santiago series, volume 1

A 12-year-old girl must leave behind her preconceived notions of what is real if she wants to save her missing friend.

Paola Santiago looks forward to summer days filled with daydreaming and “ponder[ing] algae or other fuel experiments” with her best friends, Dante and Emma, down at the riverbanks. Her mother has forbidden Pao from hanging out down at the Gila River, but Pao disregards her advice, as most of her mom’s warnings include folkloric elements, like the fabled La Llorona. Pao, a self-professed scientist, cannot fathom believing in things like ghosts that have “no scientific basis to them.” That is, until Pao and Dante wait in vain for Emma to show up at the river. Emma’s disappearance, along with those of many other young people in the area, leads Pao and Dante on a journey that will shatter the laws of physics and other scientific truths Pao holds dear. As the duo searches for Emma, they will encounter lands and creatures that Pao held to be fictitious, along with her mother’s beliefs, which Pao has often pushed away along with the connection to her Mexican ancestry. Mejia’s writing is fast-paced and engaging, as the colorful imagery places readers in Southwestern cacti fields and in the tumultuous mindset of an insecure 12-year-old. For all its exploration of Pao’s internal landscape, there is action aplenty. Dante is Latinx, like Pao; Emma is White.